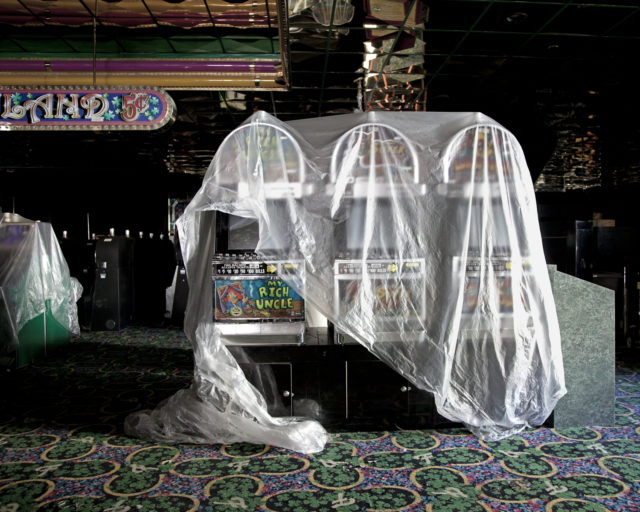 “Photography and representation in general is significant in its ability to mobilize our imagination. It is a way of seeing, very different from our day-to-day experiences of the world and much like literature it can focus our attention on what is often overlooked.”

Fluctuating between the perceived authenticity and inherent theatricality of documentary photography I equate images with historic narrative. Posing questions with regards to cultural inheritance, isolation, transience and estrangement in America.

Jennifer, what was your first camera and photographic experience?

My first camera was a point and shoot. I don’t even remember the brand. As a young girl and especially in high school, I had a very active social life, sometime around the age of fifteen I began incessantly documenting my friends at parties, concerts and around town, after fights and during late night binges. All of those images are gone now and I have almost forgotten about them because I didn’t start working in photography until years later. I can’t tell you how many times I’ve wished I had those negatives back.

I became a traveler and while travelling I was often alone in new places, photography was my journal, my confidant and my way of expressing my experiences to friends, family, and strangers alike. In a way it is both: the most private and the most public thing I do.

Photography and representation in general is significant in its ability to mobilize our imagination. It is a way of seeing, very different from our day-to-day experiences of the world and much like literature it can focus our attention on what is often overlooked.

There are far too many to list, but I’ll try to name a few: some obvious influences are Richard Avadon, Diane Arbus, William Eggleston, Joel Sternfield and Alec Soth among others; and perhaps less obvious are the romantic painters such as Caspar David Friedrich, John Constable and Eugene Delacroix; but truthfully I find I am equally inspired by authors, musicians and thinkers in general.

“What’s the point of getting killed if you’ve got the wrong exposure?”

I think that quote sums up what it is to be behind the lens in a totally focused way, in the world but separated from it. The quote that has influenced my recent work is by the singer, songwriter and all around genius Tom Waits:

“The dreams ain’t broken down here nah, they’re walkin’ with a limp.”

How would you describe your photographic voice?

I work mainly in an American deadpan and docu-fictional style. But of course, my process includes much that is not contained in that definition.

What’s the saying “The man who chases two rabbits catches none”? Focus and persistence, if you do something in a similar way long enough it changes you and you change it and eventually it becomes yours.

What do you consider to be the axis of your work?

Framing, palette, and treatment of subject matter all play a role but the thing that really binds my work together is conceptual, it has to do with what I choose to point my lens at.

I suppose the only answer or advise I have for that is, keep shooting and never under-estimate the importance of editing.

If I could answer that I would retire.

Life is the best muse.

4×5, Hasselblad, Digital SLR – and often all three, it just depends on the project.

Anything by Henry Horenstein.

At the risk of being repetitive, just keep shooting, editing and showing your work and to that I’ll add, learn to view a harsh critique as a gift rather than an attack.