“I usually follow the convention adopted by most large format photographers, in that everything in the photograph should be sharply rendered.”

My name is Jonathan Bourla. I’m a fine art photographer from New Zealand. Born in 1966 in London, England, I emigrated to New Zealand at the beginning of 1993 and am now a New Zealand citizen.

In terms of my photography, I am largely self-taught from the books by Ansel Adams. In addition to this was some very important tuition I received at a workshop run by American photographer Howard Bond.

As I had travelled a long way (from New Zealand to Ann Arbor in America) and couldn’t learn everything in one workshop, Howard kindly gave me a book’s worth of notes. Howard’s own photographs were truly inspirational, and Howard also treated the workshop attendees to close-up views of photographs by masters such as Ansel Adams, Edward Weston and others. However it was Howard’s own photographs which had the greatest appeal for me.

I saw some wonderful photographs today online, by an Irish photographer Enda Cavanagh. The colour photos of the Guinness Storehouse building in Dublin were fantastic. I was interested to read they were taken with a Sony full-frame 35mm digital camera with Canon tilt/shift lenses with an adapter to enable their use together. I have been, and continue to be, a user of film cameras.

I looked into medium format technical cameras like the Alpa Max with Phase One digital backs, but the cost was unbelievably high and beyond my means. But the camera and lenses Enda used for the Guinness project are very much more affordable, and maybe if funds permit I will be tempted sometime in the future.

“My current favourite film is Ilford’s HP5+ with rather dilute ID11 developer.”

My primary camera is a four by five-inch Gandolfi with three Schneider Kreuznach lenses. I use a Pentax digital spot meter to work out exposure and development for the film, according to the Zone System (which became clear in mind after the tuition by Howard Bond). My current favourite film is Ilford’s HP5+ with rather dilute ID11 developer, but before that was partial to Bergger and Agfa films with Rodinal or R09 developers. Recently, being without a darkroom for the first time in twenty years, I have had some film developed to my instructions by a lab which uses T-Max developer.

I get interesting responses to this Gandolfi camera. One day, when setting up, I was approached by a group of retired people who were walking nearby. They remarked on the similarity to cameras their grandfathers had owned. Another time a young boy asked me if the camera was just for show, and whether I had a proper camera hidden inside!

I usually follow the convention adopted by most large format photographers, in that everything in the photograph should be sharply rendered. For something that would seem quite straightforward, this is actually quite a challenge to achieve. Gandolfi exposures have been from a “short” half a second, up to lengthy times in excess of an hour.

I have a second camera bag of equipment, bought primarily for use in windy weather where the Gandolfi can be a liability. This is a Mamiya 7, a medium format rangefinder camera. It really didn’t get much use until the last year’s photographic project (more of which in a moment) when I used it quite a lot.

“I was very reluctant leaving darkroom printing, but found I enjoyed the computer based process.”

My photographic process took a distinct change in 2006. I changed from a darkroom based “interpretation” stage to one carried out on a computer. Interpretation is what I call the process of taking the camera’s output – in my case a film negative – and molding the light and darkness values and contrasts to give a finished print how I want it. I was very reluctant leaving darkroom printing, but found I enjoyed the computer based process more, and with results I have been very pleased with.

The tools I used in the darkroom have the same names as their equivalents on the computer – dodging; burning; contrast; and Unsharp Masking. I believe in making very subtle changes, and building up the effect slowly. It’s very important to me that the changes I make are not apparently visible to the viewer of the finished black and white Fine Art Photographic print – this is in accordance with the tradition of “straight” photography followed by Ansel Adams and his followers.

The completed image becomes a Fine Art Photograph by printing with Pigment inks on heavyweight, 100 percent acid-free, cotton rag paper. I love the feel of carefully holding my fine art photographs – the substantial weight of the paper combined with appreciating the detail, clarity, and tonality close-to is very satisfying.

My photographic style just seemed to develop on its own. Amongst the photographers’ work I admired, I was particularly taken by Howard Bond’s, which showed me the heights photography could really achieve.

“Without this interest in the Hydro stations, we wouldn’t have thought of going to some of the wonderful places on our trip.”

My most recently completed photographic project focused on the hidden life of water when exposed at the times typical for my Gandolfi camera. Taken at the Devonport and Auckland waterfronts, the medium time exposures captured water in an unusually seen state. The “Metal Cylinder” and “Under Devonport Wharf” seen here are examples.

My current project, following on the interest in water, is of New Zealand hydro-electric power stations. This is a work in progress, with negatives developed, and just starting to scan and interpret them. This project was a big undertaking, with my wife Julie and I and our elderly dog travelling around the country for a year in a four-wheel drive car towing a heavy caravan. Without this interest in the Hydro stations, we wouldn’t have thought of going to some of the wonderful places on our trip.

I was interested in photography as a teenager, belonging to a local camera club in London. Although I enjoyed the club, I became frustrated by the photographic rules which everyone had to follow. My real drive to developing my photography started in 1994, when I began the process of learning what was needed to become a fine art photographer. In 2007 I gained gallery representation and held my first exhibition. My photography means a huge amount to me. I couldn’t imagine not doing it. 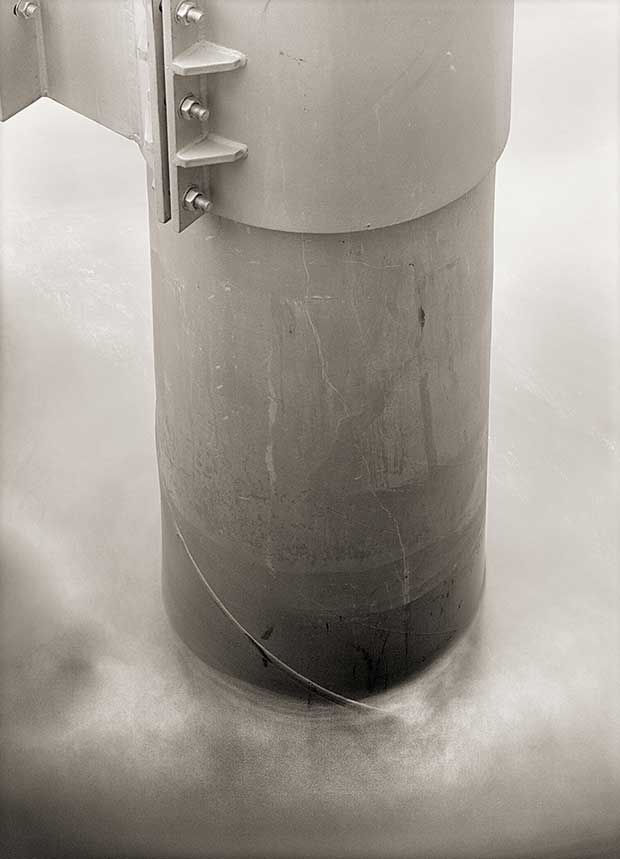