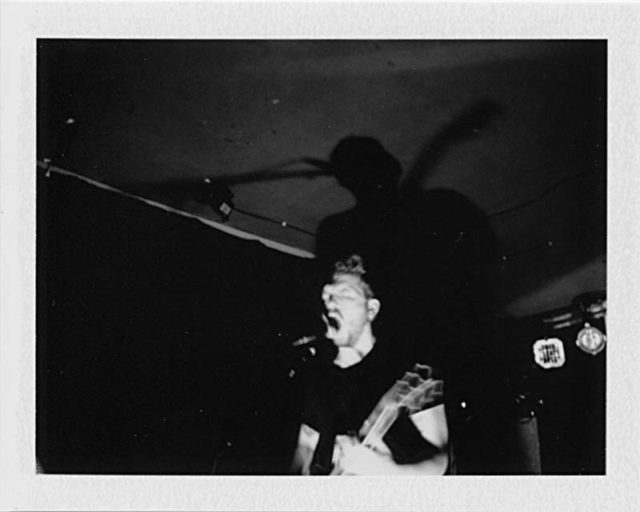 “I just pack my bag with as less gear as possible and got to a concert. Basically I’m doing on my weekends what I’ve doing before, expect that now I bring a camera. I only take photos of bands that I like, everything else would be a waste of time and material. Regarding the “voice”; an abundance of darkness, dissolving forms and a sense of isolation seem to be recurring themes.”

Sarah Kastrau (born in 1983) is an experimental photographer currently living in Bochum, Germany.

Sarah, what was your most memorable moment shooting pictures?

I can’t name a special one, although every photo is connected to a memory.

A weird idea combined with a personal crisis. I’ve been thinking about buying a Polaroid camera for quite some time before I actually started, but I always put it off because of university and work. Then, in January 2011, the worst-case scenario of every student happened to me. I failed an important exam and suddenly I faced the possibility of exmatriculation. All the work of the previous years, all plans for the future, they simply collapsed and so did I. Eventually I came to the conclusion that now, with plenty of time on my hands, I could finally pursue all the crazy projects I’ve been putting off for so long. That’s when I bought the camera and started taking pictures. Three weeks later I got notice that I could proceed to study but by the time I had already decided to take a break. I was just too tired to go on. For the next months I did pretty much nothing, except for photographing.

Right now it means everything to me. It has kept me going through a fucked-up year and granted me opportunities I would not have dreamed of. It has forced me to leave my comfort zone and put my slightly social-phobic self in public. No fun, but worth it. Apart from that, there is no explicit message that I try to transmit but I think my work reflects my state of mind quite well.

Olli Bery first left an impression on me with the photos he did for the band Amenra. His photos are far away from the generic band-on-stage shots, yet they capture the spirit of the music so perfectly. The other photographer that has been an inspiration to me is Alexander Binder. Encountering his work has been literally eye-opening to me in terms of how far one can push experimental techniques.

What is your favorite photography quote?

“Nobody tells this to people who are beginners, I wish someone told me. All of us who do creative work, we get into it because we have good taste. But there is this gap. For the first couple years you make stuff, it’s just not that good. It’s trying to be good, it has potential, but it’s not. But your taste, the thing that got you into the game, is still killer. And your taste is why your work disappoints you. A lot of people never get past this phase, they quit. Most people I know who do interesting, creative work went through years of this. We know our work doesn’t have this special thing that we want it to have. We all go through this. And if you are just starting out or you are still in this phase, you gotta know its normal and the most important thing you can do is do a lot of work. Put yourself on a deadline so that every week you will finish one story. It is only by going through a volume of work that you will close that gap, and your work will be as good as your ambitions. And I took longer to figure out how to do this than anyone I’ve ever met. It’s gonna take a while. It’s normal to take a while. You’ve just gotta fight your way through.”

Ira Glass (US radio and TV-host)

My work process is rather simple, I just pack my bag with as less gear as possible and got to a concert. Basically I’m doing on my weekends what I’ve doing before, expect that now I bring a camera. I only take photos of bands that I like, everything else would be a waste of time and material. Regarding the “voice”; an abundance of darkness, dissolving forms and a sense of isolation seem to be recurring themes.

I’m certain this is nothing that can be forced, just do a lot of work and see where your preferences are. The more you do the clearer it will become to you.

Technically it is the focus on analogue and experimental methods. So far I’ve only worked with the Land Camera, but there is a ton of other cameras and techniques I want to try. Also the use of black & white film only, I don’t think I’ll ever use color.

I don’t think there’s a special skill set required, you’ll learn whatever is necessary to you as you go on.

It’s impossible to answer that question. What is good and what is not is highly subjective and depends on the viewers personal taste. To me there is no method measure the quality of art.

Obviously music was the main theme until now. Right now I’m planning something related to the work of M.C. Escher. Generally speaking it’s a mixture of art, music, literature, conversations with friends, just anything that I can somehow relate to, that resonates within me.

There is no particular website but I discover a lot through tumblr.

“Drive-By Shootings” by David Bradford. He’s been taking photos while working as a taxi driver in New York, while actually driving. The result is a unique look at a city that’s been probably photographed to death. The strange perspective creates a feeling of distance and involvement at the same time. I especially like the apocalyptic architecture shoots taken at night.

The most important thing of course is to get started. Nothing will happen when you just sit on your couch and contemplate the possibility of becoming a photographer. Don’t worry too much about the right camera or equipment. You don’t need to spend a ton of money in advance, any camera will do. Be wary when it comes to rules about photography. Always keep in mind that every rule is actually just a guideline to produce a certain result, not an eternal truth carved in stone.