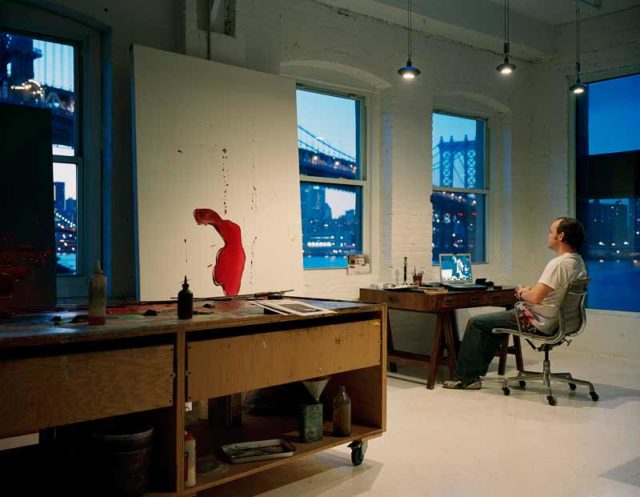 “My photographic work is a carefully constructed tableau; meanings that arise out of the construction of staged settings. These assembled allegories conflict with photography’s assumed veracity.”

Lajos Geenen (born in 1972) is a contemporary photographer from The Netherlands currently based in New York City (Long Island City), USA. He studied photography at The School of the  Museum of Fine Arts (Boston, USA) and Massachusetts Collage of Art (USA). Lajos Geenen is represented by Robert Klein Gallery and JMIREPS, NY.

“My photographic work is a carefully constructed tableau; meanings that arise out of the construction of staged settings. These assembled allegories conflict with photography’s assumed veracity. The expectation that the depicted settings and events in his work, are, in some sense, stumbled upon and unaltered, is a principal goal. Though conventional photographic depiction can provide many concrete links for the viewer, deliberately constructed conceptual content sets out to erode those links. Utilizing the power of photographic representation, implying meaning through the position of the human body to reconstruct a link between audience and image that confounds while it reassures. Since awkward or seemingly inappropriate gestures demand more deliberate attention from the viewer, the depicted gestures  are neither realistic nor conventionally artificial. This creates a paradox that relies upon close examination by the viewer to convey meaning, raise questions, and challenge assumptions.

Conveying meaning by this construction of reality is one of photography’s greatest strengths. It has the power to make the viewer feel like a witness to what is being displayed. However, anyone with knowledge of current digital manipulation techniques should be cautious of accepting any implied meaning.”

Lajos, what was your most memorable moment shooting pictures?

I’m not a big believer in “most” or “biggest” but one of those moments was when I was shooting Gravity#1 and #2.

This scene was in front of my house when I was still living in Amsterdam. I had been waiting for weeks, after I shot Gravity #1 for my part of the streets to be closed up again with the bricks.

I saw how they were laying the bricks at the beginning of my street when I was walking by in the days before. I had left  my cam. in the exact place as when I shot the first shot in the Gravity series.  When they finally arrived I was waiting for all elements to come together and when the bricklayer rested his hand in the sand leaving this perfect imprint I knew I had a great shot.

After moving to NYC a very similar scene unfolded under my window on Vernon Blvd, resulting in Gravity# 9 and #10.

I never think one makes those decisions consciously.

You just try different ways to visualise your idea and pick the one you feel most comfortable with.

Only in hind sight do you realize the deeper reasons.

That question is framed too narrowly for me.

The cliché is that most works are some kind of self-portraits and that’s true in many of my works as well.

There is most of the times some commentary on the medium itself, but I see that also in the work I like of other artists, be it painting or anything else.

For me that was never one person.

It is also different at different stages in your career.

Currently I like the work of Stan Douglas, Christopher Williams, and the staged black & white images from Swapan Parekh, among others.

I tend to like bodies of work and not necessarily a particular photographer though.

You might love some body of work and really dislike the next.

I’m most interested in the concept, but I’m still sensitive to the quality of the print.

Art is likely not needed to provide psychological explanations; there are specialists at hand for this. Christian Demand, art historian and brother of Thomas Demand

Anything can trigger an idea for a new work or series.

For me it’s sometimes linked to what I’m reading and sometimes it’s something I see (both in real life or in films).

Than I look for the right location and make sketches etc.

I was addressing this issue in my latest series untitled (artist in studio).

I asked different artists to tell me what film had been influential to their work.

The concept of the film relates both to the work in the studio surrounding the artist, that has been influences by it, as well as the relationship between you as a viewer and the work.

The subtle interplay between the image as a whole and the content of the film is as important as the psychological link between the viewer and the still on the screen.

It’s no longer the object that is the metaphor of the tableau, like in the 17th Century Dutch tradition, but the context of the film, of which we only see one frame.

In Untitled #6 for example the film is Umberto D by Vittorio de Sica (1952), which is all about fighting loneliness and isolation and has a very prominent power struggle between a man and a woman.

This is mirrored in the studio by the gestures of the men and woman in the painting on display and the solitary and introverted pose of the artist in her chair.

The “still” on the screen is the moment that the main character, Umberto Domenico Ferrari has decided to beg for money (after all else has failed).

But when a passerby want to put some money in his hand, he pretends to be checking if it’s raining by turning his hand.

Feeling strong enough about the work to follow your own instinct regarding how something should look, even when it is not lining up with what’s currently popular.

But the main issue remains what you photograph and not how.

So your photographic voice only develops when you stay concentrated on what you think is important.

When I was in art school this was of course a big deal. My comment on this came in the form of my series The Convey Series. As you can see in these images I’m not a big believer in following a teachers direction.

These questions feel like a lot of variations on one theme.

I don’t think photographers are any different from let’s say painters. If you want to be an artist it helps to be alert and grounded, regardless of your medium.

It must trigger my curiosity, most pictures are just adding to the already existing background noise that we deal with on a daily basis.

We all wish we knew what triggers the birth of an idea. My series “The Birth of ….” deals with that issue.

I tried to imagine how it would be if certain terms did not exist but you would walk into a setting where that would be the exact description.

It all started with me driving in Marrakech, Morocco and seeing a stork flying over a cemetery and I though this is how people came up with the term “reincarnation” (in cultures in which the stork is associated with “delivering” babies, that is).

It was also addressing this false notion that as a photographer you just walk into a situation and shoot it as a “neutral” bystander.

So I created settings that could have been spontaneous been stumbled upon but to the careful viewer were probably not.

I shoot 4×5 film with a traditional Cambo view cam. and with a more portable Littman camera (a converted Polaroid camera that takes 4×5 sheet film).

After that I scan the sheet film on the Hasselblad X5 scanner.

Than I print on a Lighjet printer to traditional photo paper.

This is for now, till I see something that I like better.

Guy Bourdin “In Between”.

It can show you how to use visual elements to constructing a narrative.

It should be the result of what you want to do, not the beginning.

If you enjoyed this interview, you might want to read the features about these artists who also work with conceptual and staged photography: Originality and Color (Photographer Hal), Conceptual Narratives (Jeremy Blincoe), A Springboard Into History (Bronek Kozka), and Reinventing The Image (Francisco Reina).