Home Thoughts on Photography Experiments With A Pinhole Camera 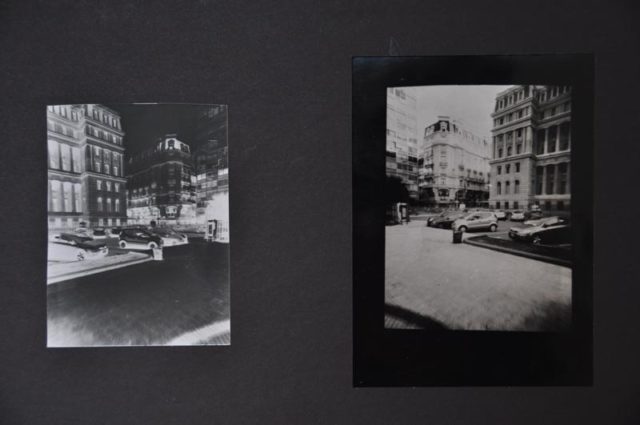 “The camera relieves us of the burden of memory. It surveys us like God, and it surveys for us. Yet no other god has been so cynical, for the camera records in order to forget.”

These pictures were taken for a university project and are thought to complement the other article I have written about pinhole photography. Another example on the subject is the series “Pinhole Seascape Photographs” by Gregor Servais.

My own experience with pinhole photography

All three images were taken with a pinhole camera made ​​from a tea-can. The measures of the camera were: 13 centimeters long, 8.5 centimeters deep and 12 centimeters wide. The interior was painted with black paint. Before going out on the street, I went to the darkroom and put photographic paper on the opposite side of where the small hole was. Then I left with an index to define the approximate exposure time considering the size of the camera and outside weather conditions.

Technical aspects: Since it was a sunny day, yet rather hazy and with a partly cloudy sky, I calculated the exposure time to be around three minutes. I put the camera on a wall at the entrance of the Court Building in Buenos Aires, facing the direction of Plaza Tribunales and with the Colón Theatre in the background.

Idea behind the image: The idea was to use the wall as a tripod, and thus preventing the camera from moving. Unfortunately from time to time people walk by in front of the camera, since I wanted to photograph a static scene.

Conclusions: The contrasts and details of the objects in the foreground look pretty good. However, the details of the buildings in the background didn’t come out all that well and are rather a gray blur. Maybe the photo would have turned out better elevating the exposure time a little bit.

Technical aspects: The weather conditions were almost identical to those in the first shot. Hazy sun, partly cloudy sky. This time I raised the exposure time a notch (3:05 minutes), also due to the fact that I inadvertently closed the pinhole for a short moment.

Idea behind the image: I put the pinhole camera on the ground facing the pasture of the park. I wanted to take a picture of a man who was napping in the shadow of the statue. In the end, he didn’t come out very well on the picture. In the real situation, the man looked closer, whereas in the picture the grass is the predominant element.

Conclusions: I should have moved a step closer to my subject and should have chosen a higher position to put the pinhole camera. The objects in the background seem very blurry and out of focus. That may be due to the fact some pigeons had passed by in front of the lens at one point.

Technical aspects: About half an hour later of the first two shots, the weather had changed a bit (16:04 pm). The sky was clear now. However I decided not to shorten the exposure time, since I put the pinhole camera in a shady area, so I ended up choosing a time between the two previous shots: 2:55 minutes. The camera was placed on a pole about one meter high.

Idea behind the image: Again I chose a rather static scene with non-moving objects: kiosk, trash cans, cars, and buildings.

Conclusions: In the foreground, the sidewalk occupies too much space and leaves a great void which makes up almost half of the photo. Also the light situation was a little complicated. In the center of the photo it was too bright, and the other areas remained in shadows. For being such a primitive camera, it of course couldn’t deal with the high contrasts and tones of different degrees and intensities of the natural light. So the building in the background turned out rather pale with little details.

Have you ever build your own pinhole camera? Please share your experiences. If you want to you can also submit some images and get featured on the site.

Graciela Iturbide: “A Good Excuse To See The World”

The Dark Side Of The World Cup In Brazil

On Landscape And Photography