“I’m curious about how America imitates itself. In a culture wrapped up in entertainment, it’s sometimes hard to decipher whether what you’re watching is real life or someone’s reality TV show. It’s like origami, all folded into itself until it resembles something so fanciful and bizarre that it’s difficult to unravel.”

Mark Ovaska (born in 1980) is a New York City based photojournalist. His study of photography has been almost entirely informal. He started working in the dark room. First in one down the street where he used to live, later in Brooklyn assisting Alan Chin who taught him everything one can’t learn by reading.

Mark Ovaska learned photography like he learned most things in his life – “by listening to people who are very good and by making a lot of mistakes.” Something he found out: “The amazing thing is, that the people who are really good are usually very nice and very accessible.”

In addition to that, Mark Ovaska attended a few strategic workshops. For example classes with David Alan Harvey and James Nachtwey. “They kicked my ass. It was more of a reality check on life than a class on photography”, Mark Ovaska remembers.

Mark, what was your first camera and photographic experience?

In the early 90’s, I was in my early teens and my family planned this extended camping trip to Prince Edward Island. My preparations included these walks to the local drug store to ogle this plastic camera they had. A few days before we left, I bought it and as much film as I could afford. I remember hording the film in bundles. My parents asked what I was going to do with so much film and I remember being perplexed by the question. “I’m going to take pictures”, I said.

And I did – of everything! I think I shot the first roll before we even reached the border.

I became a photographer because it was inescapable. I like to call it a moral imperative. I was taking pictures of everything while I was supposed to be working or studying or whatever was going on. I took terrible pictures of flowers and keyboards and leaves. But eventually the act of taking pictures led to more exploration until I eventually realized that if I was going to keep taking pictures, I had better try to be really good at it. Because it was either get really good or give up – and I knew I couldn’t just quit.

Photography is an interaction. A temporary courtship or dance of sorts. I’m not into mystification of photography, but there is something about the human process of taking a picture that continues to fascinate me – not the physical act of taking a picture (that’s easy) but the humanity required to really observe and photograph another living thing.

The photograph is just a kind of trace element that is left behind from these interactions; fragments of a life.

There are so many brilliant photographers out there. Amazing work is being done even while I’m writing this. Generally, I prefer to get to the source. The people who inspire the people who inspire. You can’t talk about Robert Capa without talking about Roger Fenton. You can’t talk about Cindy Sherman without talking about Hippolyte Bayard. Thankfully, photography is still young so this isn’t a terribly difficult task, but what it means is moving outside of the latest trends or big story or gallery opening. It means attempting to understand the intrepid minds that all of us borrow from when we make an image that has a spark of familiarity.

I also find looking at great non-photographic art is more inspiring than looking at photographs – last year I really got into Degas’s charcoal work, for example.

During an extended discussion with Andrew Lichtenstein he said something like:

“The photograph is immaterial.”

But if, for some reason it doesn’t sound as amazing to you right now as it did to me you’ll just have to talk to Andrew yourself. Seriously, because I’m not doing it justice.

How would you describe your photographic style and way of working? How do you realize a shooting?

I’m curious about how America imitates itself. In a culture wrapped up in entertainment, it’s sometimes hard to decipher whether what you’re watching is real life or someone’s reality TV show. It’s like origami, all folded into itself until it resembles something so fanciful and bizarre that it’s difficult to unravel. I appreciate this the most then it’s very natural; when the people I photograph don’t see it themselves or are caught of guard. When this happens the moment becomes suspended and, to me, immediately timeless in a world outside the context of our media-driven culture.

As for realizing an assignment. The most important part of realizing anything is to think about it before you do it. I think people forget this because photography is so generous. For example, you could go out there and take a thousand pictures without thinking about what you’re doing and then someone who is thinking could probably make something of your effort. In fact, this is what most people do.

Alternatively you can think about what you’re doing, be cognizant of what’s going on around you and why it’s important and take only the pictures you really need. That’s the best way to realize an assignment because with assignments you’re typically on a tight schedule.

What’s important in order to develop an own photographic style and how did you achieve it?

Go. Take pictures. Stop reading this, get your camera and photograph something. Take lots of pictures. Think about them. Take lots of thoughtful pictures. Explain them. Dream about them. Defend them. Get in a fight over them. Give up on them, kill them, resurrect them.

What qualities does a good photographer need?

An interesting perspective that you believe in strongly enough that you can defend it against the flood of all things similar or contradictory.

I have to feel something. Sometimes this takes a few photographs to achieve and sometimes it can happen with one. That doesn’t matter. But, either way, if doesn’t happen then the beautiful light doesn’t matter – nor does the expensive film or new equipment or the adventure you had getting there.

But you can also be inspired on the job. I love talking to people about one thing (usually the thing that I think I care about) and then learning something very different. Not a single shoot or project has led me to the story I thought I was going to find.

I went to Florida to find my roots and found the latest chapter on racism in America. I went to Pennsylvania to find serenity and ended up uncovering fracking. Eventually I shot the first story on the matter for the New York Times. I went to Haiti to find a disaster and ended up breaking the story of hundreds of already-adopted orphans stranded there because of bureaucracy. Every major US broadcast network eventually ran the story.

How do you keep up to date with new developments in photography, to keep on learning new things?

This happens naturally for me. I wouldn’t call it “new developments”, but perhaps undiscovered facets. I’m very curious, so I’m naturally drawn to what I don’t know.

Whatever is there and good and can do what needs to be done. I started using a busted-up 1930’s SpeedGraphic about a year ago. It’s amazing when the shutter behaves. It was sticky so I put a dab of oil in there and now it’s all over the place. But so am I when I’m using it so this seems appropriate. Someday maybe I’ll get serious and buy a new lens for it so it can be serious. too.

My equipment follows my lead.

I don’t look at a lot of photography web sites. I stop by “A Photo Editor” every so often, because the industry is often more of a conundrum to me than the pictures. I bought a subscription to HotShoe magazine, because I love the essays they publish. I also read the Paris Review religiously and love it when they have photo projects. It’s like opening a present every 3 months.

Of course there are all the blogs that are unavoidable, because they keep popping up on Facebook or Twitter. 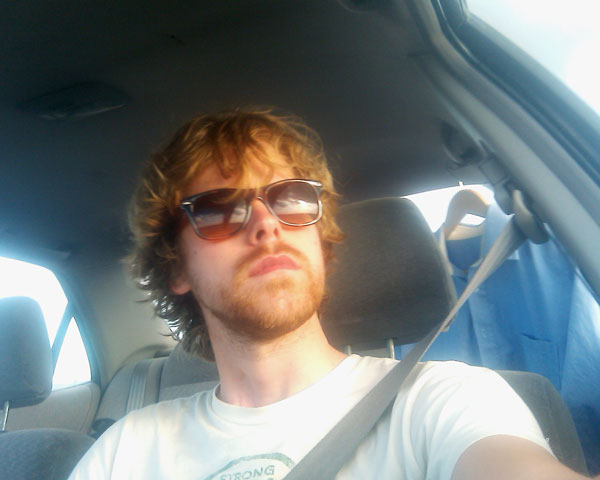