Ian Brumpton (born 1969) is a street photographer from England.

He’s an alert observer of life on the streets able to find the extraordinary in the ordinary.

Instead of “in-your-face”-shots he prefers are more candid approach.

In this interview he tells why he considers the excessive use of mobile phones to be one of the biggest challenges in today’s street photography and explains why he once missed a several thousand dollars worth shot just by a few seconds.

Ian Brumpton, what was your most memorable moment shooting pictures out on the streets?

That’s a tricky one! Probably the Student Protests in November 2010 in London – I’d been photographing the protests all day and it was fairly obvious that things were going to get ugly.

As it got darker I managed to avoid the police kettles and followed a break away group of anarchists.

I photographed them burning the Xmas Tree in Trafalgar Square whilst police looked on and then they went on the run again sprinting up Regent Street like Usain Bolt with a following wind.

When I caught up with them a few minutes later there was a trail of devastation leading up to Prince Charles’ stationary Rolls Royce Phantom which had been covered in paint after an attack by protesters.

The scene was captured by only one press photographer and he reportedly sold the images and video for several hundred thousand pounds. I missed the scene with my camera by two minutes.

Do you have a certain routine?

I guess like everyone I have certain routes which are influenced by how easy it is to get from A to B. I do however try to visit somewhere new every week if time allows.

I had hoped to have shot in every borough of London by the end of 2013 but realistically it will take me another year – London’s a big place.

I tend to go out in the afternoon rather than mornings because I prefer the afternoon light, generally I find that after three or four hours my concentration starts to slip and I stop taking as many photos.

What does a street photograph need in your opinion in order to stand out and get noticed? Especially keeping in mind the abundance of visual imagery in today’s media?

Great photos generally pose a question or series of questions in the viewers mind or tell a story that they can engage with, it’s hard to do with a single image which is why those images that do stay in the mind.

You can also stand apart stylistically but it can be hard to keep a very different style sustainable over a long period as they can become confining and restrictive.

On the internet it’s even more difficult as people are often only looking at thumbnails so you need to have a pretty impactful image to grab someone’s attention.

What reaction do you intend to provoke in people looking at your images?

In reality I take photographs for myself because I’m not being paid by anyone to produce a piece of work, but obviously it’s very rewarding when images that you have fallen in love with give pleasure to others too, we all crave a bit of adoration.

Smile and move on, occasionally quite quickly.

Honestly speaking though I have few problems with the public and negative reactions, probably because I use a small camera and my style is non-confrontational street photography.

I’ve only once had to delete an image by request in the last five years – perhaps that means I’m not taking as many hard shots as I should be.

What’s your strategy when you walk up close to people. Do you interact with them or take the shot and move on?

Generally I take the shot and move on but if people notice me taking the shot I normally make eye contact after and give them a smile, it depends on the shot you want.

Sometimes I look at someone to get them to look back at me and give me eye contact, sometimes people just look at their shoes when they see you coming.

I believe in respecting people on the street. I’m not the Bruce Gilden type. 90% of the time people know I’m taking their picture and don’t seem to mind overly.

You shoot black and white. Why do you prefer monochrome for your images?

Originally it was a nod to the greats like Henri Cartier-Bresson and Brassaï that inspired me all of whom seemed to work in black and white.

“I’m still working on a unifying style for my colour street work.”

As time has gone by the advantage of black and white for me is that it makes me concentrate more on character and situation than seeking striking colour combinations in a frame which I always find myself waiting for when I think in colour.

Some shots only work in colour or b&w but for me personally I’ve always found b&w gives me more usable shots.

Having said that I have been taking some colour stuff last year and I’m still working on a unifying style for my colour street work though b&w will remain my mainstay.

I think it’s been said better by many others in terms of practicalities but more than anything you must have something to say or something that you personally want to record.

For some people it’s about sharing their vision of the world and for others it’s more documentary about recording a particular group of people or location over a period of time and change.

It’s not about a series of random images from the streets with no connecting threads of style or substance or story and usually you need a human element.

However you choose to define it though at some point someone special will come along and prove your definition entirely wrong.

Street photography is very much about seizing the moment. Things usually happen unexpectedly. How do you train your eyes to “know” when a special moment is about to come?

It’s a tricky question – some people are definitely more observational than others and good street photographers tend to have a sharp eye for what’s going on around them.

You can still be a great street photographer without being the world’s greatest observer – it might just take you a bit longer to find your shots and you might not see as many.

“Break it up into 1 hour or two-hour blocks when you are looking for shots intensively.”

Being well over six-foot and having 20-20 vision is also definitely a bonus (sadly though I don’t benefit from either of these). It’s also true that you can make a shot from nothing, something that reportage photographers are well used to but that fewer street photographers use, i.e. provoking a reaction (which doesn’t have to be by using a flash in someone’s face – it could just be a smile and pointing the camera at someone walking down the street).

One tip I would give is to organise your shooting into session times to improve your concentration – so rather than going out shooting all day all out, break it up into 1 hour or two-hour blocks when you are looking for shots intensively, then take your breaks to have a coffee, snack etc. relax and then get back to it.

You can’t concentrate fully all day long taking photographs any more than you can doing anything else.

If I feel stuck in a rut at any point I try to read through a book by one of favourite photographers before I go out and then try to take photos in their style to make things more interesting e.g. go looking for extreme close-ups or through the window shots, or people on buses, or dramatic shadows – i.e. give yourself an exercise/brief to get you in the rhythm of taking pictures again.

If I’m aware I haven’t taken a photo of anyone for quite a while I’ll often stop and take a static shot of a shop window or anything just to reboot my eye.

Your pictures combine a lot of compositional elements: lines, shapes, shadows etc. How much of that is planned and how important is intuition and a quick hand to press the shutter button?

For the images that are heavily composed in terms of line and shadow I would quite often have found a spot where I don’t stand out and wait for something or someone interesting to come into the desired shot.

I would also compose my ideal frame before I took the shot – then it’s a bit of luck as to who appears while you wait – as we all know.

I only really stay stationary on those days when I come across some special light, normally I like to stroll around and snap on the hoof.

What’s the biggest challenge shooting on the streets?

People in London are definitely getting bigger and slower, so navigating the pavements is certainly becoming trickier.

More alarmingly every other person walking down the road does so while texting or talking on a mobile which becomes a little monotonous when you’re looking for interaction, incident and eye contact.

Generally I’m quite confident at taking the shots I want to take.

My biggest challenge at the moment is night photography, have tried this winter to do more night shooting but I’m afraid the camera I have isn’t really up to it even with really static frames, so I’m saving up for something that will give me better quality images in the dark without using flash.

If anyone has any recommendations please drop me a line as I’d like to add London by night to my portfolio. 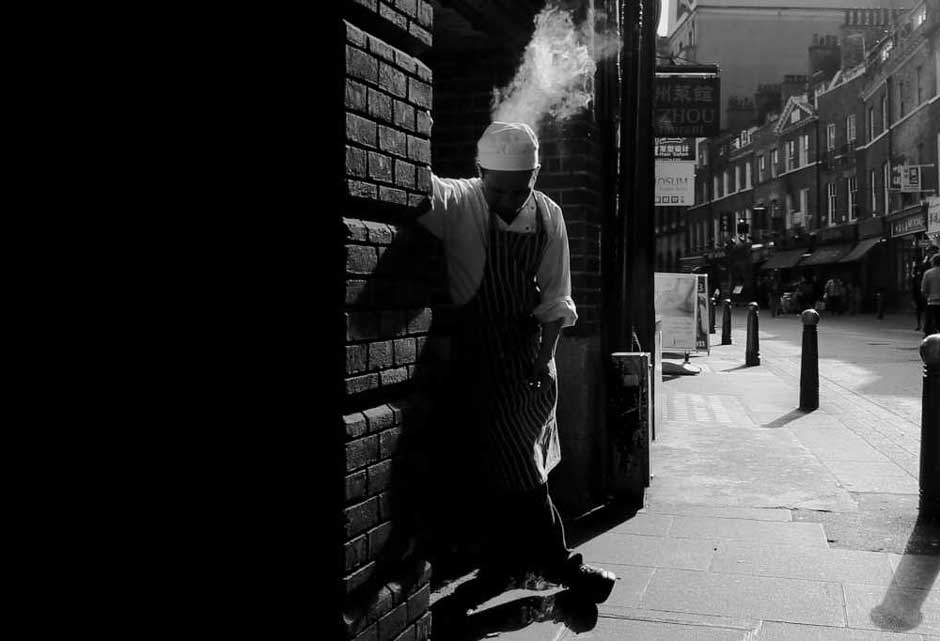 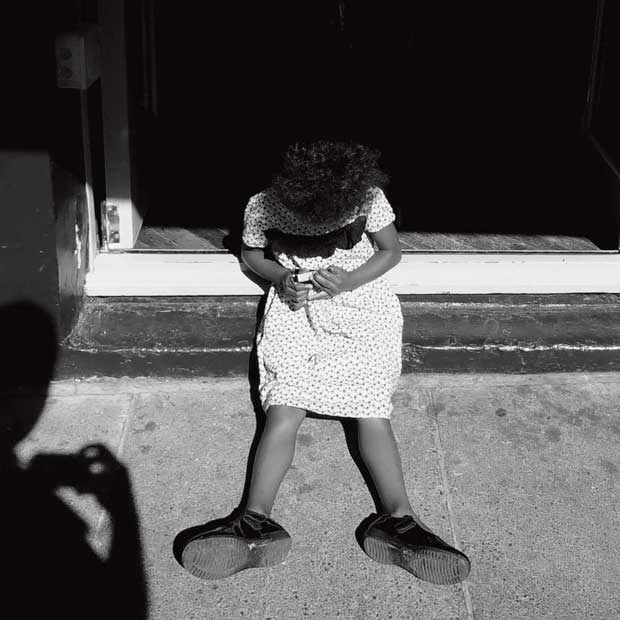 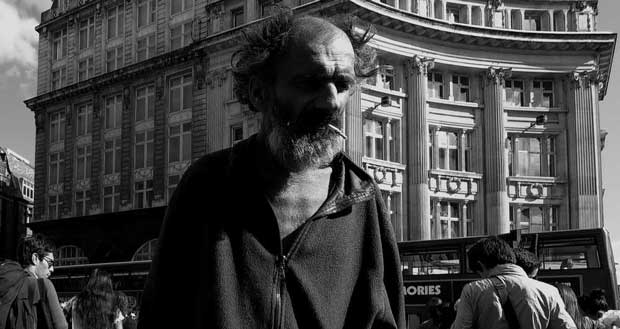 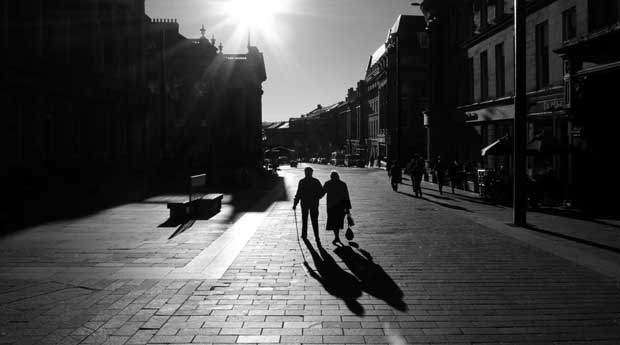